Should I buy the Samsung Galaxy S10 Plus?

The Galaxy S10 Plus is a very good smartphone despite not being a huge upgrade from the S9 Plus. The cut-out front cameras are no bother and the display is absolutely the best on the market. It's packed with premium features.

Samsung's One UI skin is a huge improvement on anything it has done before and this phone is pretty much the most premium Android phone on the market. Unfortunately battery life on the Exynos model is poor and the new ultra-wide-angle camera won’t excite everyone.

Let’s tune out all the noise around smartphones and look at the facts. The Samsung Galaxy S10 Plus is a very good phone. It has the best display on the market, improved software and great build quality.

But also, it is a supremely expensive phone. This is not unusual, given the iPhone XS’ similarly high price and the introduction of the folding Galaxy Fold that costs almost double that. The S10 Plus also costs the same as Huawei’s Mate 20 Pro and if you spec it out retails at up to £1,600.

We can’t see why Samsung has put the price up so much compared to the quite similar S9 Plus, and in our view it suffers for it. Battery life is poor on the model we tested and you can get most of the same features, including the triple rear cameras, on the cheaper regular S10.

So, the S10 Plus is a very good phone, but battery life woes in the UK stop us from showering it with a perfect score. You might be tempted by the new Galaxy S20 range as well as Samsung's second foldable phone, the Galaxy Z Flip.

In the UK you can buy it from O2, Carphone Warehouse, EE, Three and Vodafone. In the US it's on sale at Best Buy, among others.

The special edition 12GB RAM ceramic black and white models start at £1,099 and have 512GB storage. A version with 1TB(!) costs £1,399. You don’t need that one, by the way - it's very expensive and the base 128GB is more than enough storage for most people, particularly when it's expandable via microSD up to 512GB more.

This review is of the pearl white 8GB RAM / 128GB storage model. You can also get this version in black and green.

The Galaxy S10 Plus is the first Galaxy S phone to have a screen interruption akin to a notch. Samsung has opted for a cut-out in the top right corner of the screen. It’s pill-shaped as it has two front-facing cameras compared to the single-lens circle on the Galaxy S10 and S10e.

The extra lens isn’t for wide angle like on the Pixel 3, even though the camera app would have you believe that is the case when you tap to see a wider angle – that’s just a digital crop. The sensor is actually there for portrait mode selfies, not something everyone will want or need.

It also shifts the battery and network icons toward the centre of the screen. Check it out to see whether or not it bothers you. The cut-out also obscures video in full-screen mode much like a notch does.

The S10 Plus adds a higher-capacity 4100mAh battery than the S10 and a larger 6.4in display. These three things are the only differences. It has the same 8GB RAM, the same 128GB base storage, the same excellent display tech and the same triple-lens setup on the rear.

It means you don’t have to buy the larger phone to get the best rear camera setup, though this is the same for the iPhone XS and Pixel 3 so Samsung has made the right decision here.

Those triple cameras aren’t the upgrade they appear to be at first glance. It’s great to see three, but the 12Mp main- and 12Mp telephoto sensors are the same as on the S9 Plus. Samsung has added a 16Mp wide-angle lens, which is good but does distort at the edges in the fish-bowl way these lenses do.

Results are generally very good, but we don’t think the portrait mode is as good as the iPhone XS or Pixel 3 and it looks a bit artificial where the others are, to the untrained eye, often DSLR-esque. That said, the main- and telephoto sensors benefit massively from OIS, and photos are crystal clear in most situations – if saturated and processed in a way that makes them feel slightly less natural than on the iPhone or Pixel. 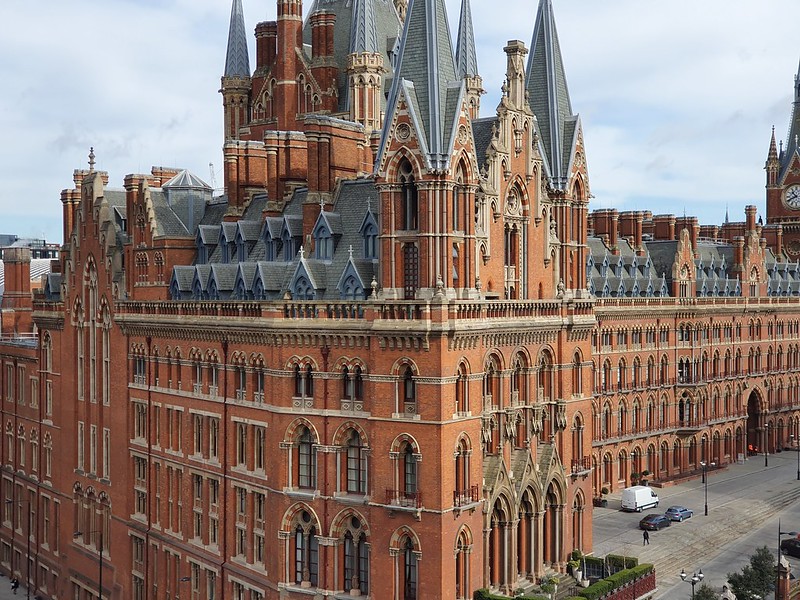 There are a couple of new optional features in scene optimiser and shot suggestions, the former there to decide which mode is best to shoot in and the latter to help you line up your subject and frame to get the best picture possible.

Video capture is good and can record in 4K 60fps with good granular control. But despite all these options the cameras on the S10 Plus are very good and you will not have any complaints. It’s great that it can be an outstanding point-and-shoot as well as giving pro options for enthusiasts, including shooting in RAW.

The S10 Plus is the best-looking Galaxy S yet with its sliver of bezel and awesome colour combos, but the change to a cut-out camera helps Samsung mask the fact this isn’t actually a much different design from the S8 or S9. It’s gone back to the shiny metal rim with a curved-edge display and tiny bezels at the top and bottom, but this is still an evolution of the great design of the S8.

Build quality is unquestionably beautiful but you’d expect it for the price. We found it difficult not to keep picking it up, such is the premium feel here.

New for the S10 Plus is an in-screen fingerprint sensor and we are pleased to report it is better than those found in the OnePlus 6T and Huawei Mate 20 Pro. Those phones use an optical method which requires you to press down quite firmly, whereas the ultrasonic sensor on the S10 Plus requires an accurate but lighter tap. It’s great, and much better, even if you might miss the physical sensor on the back.

Perhaps for the last year there is a headphone jack here, proof that you can fit it in a phone with dual stereo speakers, wireless charging and full IP68 water resistance.

It’s a lovely looking phone but because of the size it’s also a two-handed phone.

The best thing about the S10 Plus is the display. It’s the best on the market on any phone with amazing colour reproduction, excellent viewing angles and top visibility in sunlight compared to any phone out there. It’s a 6.4in OLED with an insane 3040 x 1440 maximum resolution.

Samsung doesn’t set it to this out the box but you can scale it up if you’re watching 1440p content and it looks absolutely amazing. Putting it down a step saves battery life and you won’t notice the difference most of the time.

Samsung sets the display to ‘natural’ out the box too, but we prefer the ‘vivid’ setting.

Unfortunately, battery life is this phone’s Achilles’ Heel – it is not as good as we’d hoped. Sure, it’ll get you through a day’s use but we found at best it’d get to three and a half hours screen-on time before we were hitting 20% and reaching for a charger.

We reviewed the Exynos 9820 version which is on sale in Europe. Some American tech journalist peers have told us the Snapdragon 855 version they reviewed is pushing eight hours screen-on time no problem, even when roaming.

If it’s the case that the 855 model can get *double* the screen-on time then the Exynos is not fit for purpose. It spoiled our experience with the phone no doubt and is far worse than on the  Huawei Mate 20 Pro, a phone that costs the same and has outstanding stamina.

Samsung also annoyingly still ships the phone with a QuickCharge 2.0 charger which tops up faster than a 5W iPhone charger but much slower than the last phones from Huawei, OnePlus or even Motorola.

When benchmarked against popular and similarly powerful phones, the S10 Plus performs as expected: higher than Snapdragon 845 phones like the OnePlus 6T, higher than the older Exynos S9 and higher than the Kirin 980 in the Mate 20 Pro.

As usual in these synthetic benchmarks, the iPhone comes out on top. This is only raw speed, though, and we found the S10 Plus to stand up extremely well in comparison.

The S10 Plus has wireless charging but also wireless powershare, which lets you charge other products with the phone turned face-down. Samsung hopes this will be its Galaxy Buds but it can charge phones and some smartwatches too. The output is only 4.5W, though, so it’s very slow and obviously means you can’t use your phone at the same time.

But if you are charging your phone overnight it means you can charge your headphones or even another phone without the need to carry two chargers.

The phone is also Wi-Fi 6 compatible, so when the new standard becomes more widespread you'll be able to take advantage of faster connection speeds.

One of the best things about the S10 Plus is the new software skin. Samsung’s version of Android 9 Pie is called One UI and boy is it an upgrade on ugly Samsung software of yore.

Gone are any hint of bad design and waterdrop sounds, instead replaced by slick animations, thoughtful adjustments to core apps and menus that don’t overcomplicate the Android experience too much.

And with 8GB RAM it’s finally incredibly smooth to use with absolutely no stutter. This is, whisper it, iOS levels of fluidity, which we didn’t expect.

But timely updates are not guaranteed. Samsung is notoriously slow with OS upgrades and even security patches. The S10 Plus should be good enough hardware to run Android Q and then R, but you should not assume Samsung will support it that long, which is a shame.

If you really want your high-end phone to run three Android versions in its lifetime, the only way to ensure that is to buy a Pixel phone.

That said, One UI is a thoughtfully designed skin and is firmly better than what LG and Huawei currently offer. Sure, it changes stock considerably but when it’s this polished and considered then it’s a great experience. You get Samsung’s UI gestures but they aren’t compulsory, menus look slick particularly in the system-wide night mode, and granular control over display, notification, security and themes make this a fun phone to configure to your liking.

The Galaxy S10 Plus is, as expected, one of the best phones you can buy. It has an industry-best display, dual stereo speakers, outstanding cameras, a headphone jack and wireless charging. It can even wirelessly charge other phones.

But the Exynos model we reviewed has just-fine battery life where the Snapdragon 855 version and rival phones are streets ahead. On a phone that demands a lot with the bright OLED and whip-fast performance we found that hitting 20% at 6pm on a phone that costs at least £899 / $999 is just not acceptable.

Despite this one flaw, the S10 Plus is one of the best phones going. Just pack your charger.