Should I buy the Samsung Galaxy S10?

The Galaxy S10 is a very good phone, sacrificing only screen size, dual front facing cameras and battery life compared to the S10 Plus. The regular S10 is a more comfortable size phone at a better price and has the same great triple rear cameras.

Build quality is outstanding and it has every feature under the sun, with a headphone jack, wireless charging, full waterproofing and the best display on a smartphone to date. Battery life is the main disappointment but aside from this it’s an amazing phone.

After the Galaxy S9 looked practically the same as the S8, Samsung had to find a way to tweak its winning big display smartphone formula enough to make the S10 look like a new step forward.

The company has done this by skipping the trend for notches and opted for the newer hole punch-style cut out for the front-facing camera. This pushes the screen’s borders even wider, the bezels even narrower and the price even higher.

But there are genuine improvements in the Galaxy S10; the cameras, display and software are better than ever. It is very expensive but if you wait a couple of months the prices will start to fall as they always do with Samsung phones.

The Galaxy S20 range is now here if you're tempted by a newer generation. You should also check out the Galaxy Z Flip, Samsung's second folding phone.

It's available to buy now from Samsung. In the UK you can also get it from Vodafone, Carphone Warehouse, Three, O2 and EE. In the US you can get it from retailers such as Walmart or Best Buy.

You can also make sure you're getting the best price with our best Galaxy S10 deals.

Samsung also announced a Galaxy S10 5G edition that is to be launched later in the year. It has a huge 6.7in display and will, unlike the other S10 phones, support upcoming 5G data network speeds.

Our thanks to Mobile Fun for providing the unit for this review.

Infinity but not quite beyond

If you thought the S8 and S9 had small bezels, the S10 looks even better – if you’re into the look. By moving the front camera into the actual display via a cut-out, the S10 achieves a 93 percent screen-to-body ratio. It calls it the Infinity Display, if you buy into the marketing spiel.

We’ve seen similar looking full displays on the Oppo Find X with its slider and the Honor View 20 with a cut-out but it’s the first time a Galaxy S phone has had any form of notch.

We don’t think it’s a big deal but you might not like the idea of a floating camera module in the top right of your actual screen, with some icons pushed to the left rather than being in the top right corner.

But side by side with the Galaxy S8 or S9 the S10 is impressive, and makes the bezels of the older phones somehow look dated. Our prism white review unit is iridescent with hints of colour and a silver rim. The green version is also very attractive, and while there is a black version it is by far the one that shows the most greasy fingerprints.

The S10’s 6.1in AMOLED display is, as usual, the best you’ll see all year. Samsung really knows how to calibrate a panel and if you like the saturated vibe here you’ll be more than happy. Out the box the screen is set to more natural tones but we prefer the vivid setting.

The maximum resolution of 3040x1440 is nuts and the phone comes set to 2280x1080 out the box to save battery life and acknowledge that most stuff you look at is in 1080p anyway.

Outdoor viewing is exceptional as are the viewing angles. If there was ever a display to get lost in, this is it. But that cut-out camera is going to bug you when watching full-screen videos as it unavoidably obscures the picture.

The design language is largely the same as before here, with a glass sandwich that attracts fingerprints. The new colours of green and white go with a slick Samsung black, and we’re pleased to see – still – a headphone jack on the bottom edge, and decent in-ear AKG headphones in the box.

Samsung continues to prove that it can fully waterproof a phone with all the ports in an incredibly sleek form factor, and while this isn’t the biggest hardware upgrade, Samsung has cleverly changed enough to make us feel like this is all quite new. Clever.

The biggest upgrade on the Galaxy S10 is the camera set up. Instead of the one lens of the regular S9 you now get three – and it’s the same set up as on the larger S10 Plus, so the more expensive model no longer has that advantage.

Results are excellent with Samsung’s usual saturation and sharpening pandering to modern social media tastes. The S10 wears this on its sleeve, with an Instagram mode built right into the camera app that lets you post without opening the Instagram app itself.

You may have to click on the below gallery to view it: 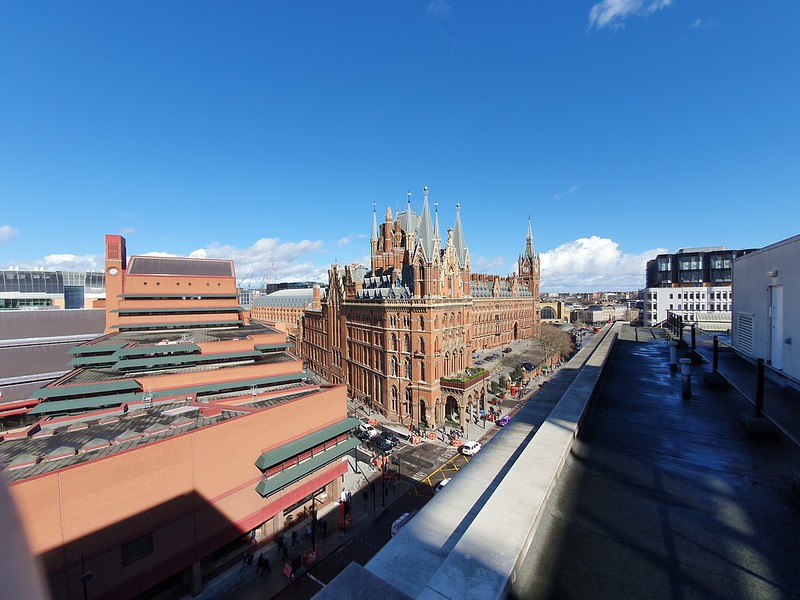 We find the portrait mode (called live focus) a little washed out and not as impressive as the Pixel 3 and iPhone XS, but you’ll be pleased with the versatility of the three lenses.

The super wide angle is best for landscapes and views as the slight fish-eye that you can’t avoid makes people in group shots look odd. The main sensor’s variable aperture means night time shots are decent, but low light performance is still behind Huawei and Google with their specific night modes.

But as a point and shoot phone camera, the S10 is only beaten for simplicity by the iPhone XS and XR. Samsung has pared the app back, and while there are AR emojis and stickers if you delve deeper, what it really excels at is easily taking amazing photos. Job done (for all but the fussiest pixel peepers among us).

Another upgrade from the S9 series is better stabilisation in video recording, which is noticeable. Samsung has also added useful scene optimisation in the camera app that accurately selects the best shooting mode, and is subtler than LG or Huawei’s.

The phone is whip fast out the box, running on the 8nm Exynos 9820 in Europe and the Snapdragon 855 basically everywhere else (we reviewed the former). It’s the most fluid a Samsung phone has ever been, with animations that are actually slicker than some on the Pixel 3. If the S10 still works like this in a year we will be very impressed, but Samsung phones tend to creak a bit after not very long.

To combat this the S10 has 8GB RAM as standard (twice the RAM in the Pixel 3), along with a choice of 128- or 512GB storage. This is great to see especially with the bonus of up to 512GB storage in the microSD slot. A terabyte in your phone in 2019 began with the Note 9 and means the Galaxy S10 will bring the functionality to the mainstream (not that everyone will take advantage of it). The downside to this specs boost is the price shooting up for the higher end model.

The phones we’ve measured the S10 against are all high and and have similar specs. We’ve thrown the S9 in there for a previous generation comparison too. All these phones perform excellently though and you won’t notice a huge difference despite the results.

A slightly pointless addition to the S10 that’s playing catch up with Huawei is the S10’s wireless power share. Turn it on and place the phone face down and it turns into a Qi charging mat. You can charge any Qi device on it including the new Galaxy Buds in their charging case.

This is a gimmick as it means you can't use your phone when charging things, but it at least could be useful if your phone is plugged in and charging at night to share power with headphones or your smartwatch. It’ll charge a second phone very slowly at 4.5W.

A more useful upgrade in the S10 is the 3,400mAh battery up from 3,000mAh in the S9. It means it lasts a tad longer but the battery life is nothing to write home about. The most we ever got out of the phone was three hours of screen on time, which is lagging behind the Mate 20 Pro that retails for the same price.

In our standard battery test using Geekbench 4, the S10 lasted a measly four hours 47 minutes – the Mate 20 Pro lasts 11 hours 35 minutes. The S10 Plus did not fare much better with 6 hours 37 minutes.

Samsung quietly had to remove the iris scanning biometrics it so hyped up on the S9 as the bezel-less design of the S10 means it can’t fit in an infrared light. Instead you have 2D face recognition or an in-screen fingerprint sensor.

We have mixed feelings about the fingerprint sensor. It works, but you have to place your thumb quite deliberately and it failed for us probably one in four times. Even though it works in wet and cold and is suitable for secure payment authentication, when the tech is this young we’d have preferred a well-positioned rear-mounted physical sensor still.

Samsung’s updated software based on Android 9 Pie is called One UI, and it’s pretty great. Long gone are memories of water droplet sounds from old, terrible TouchWiz interfaces. Instead are good animations, thoughtful overlays and gesture controls should you want them.

It means that this is a very customisable device, just with a different aesthetic to an openly blank slate kind of phone like you might feel like you’re getting with OnePlus’ closer to stock OxygenOS.

Bixby is still terrible though. It really is languishing, with simple things an impossibility. Using Bixby voice, we said ‘show us a map of the area’ when in our London office and it showed us somewhere in Cyprus. Simply, it is only good for incredibly basic and quite specific questions like ‘what is on my calendar?’. For some reason we didn’t accidentally press the dedicated Bixby button accidentally all too often and simply forgot it was there.

You can finally customise the button to do something else though. It always has to open Bixby with either a single or double press, but you can customise the other option to be an app or command. It’s Samsung’s small concession that Bixby still sucks, and people will not be using it.

Samsung would have you believe the S10 is a giant leap forward when really it’s just an evolution of the already excellent Galaxy S line. That said, it is a gorgeous premium device: the thin bezels and camera cut out might not be to your taste, but we can’t argue with the quality of the amazing display.

The addition of three cameras on this regular model is a great move by Samsung and means you only lose out on screen size, battery life and the extra front facing camera compared to the S10 Plus.

It’s the average battery life that stops the Galaxy S10 being an all-day powerhouse device (for that you have the Note 9) but for most people this is one of the best phones you can buy in 2019.

We also explain when is the best time to buy a Samsung Galaxy phone.