The first ever live action Star Wars show is a huge hit so far, but audiences outside a few countries are still waiting for The Mandalorian to arrive.

Disney is still ploughing ahead with season two though, so while those of us in the UK are stuck waiting until the end of March to get our hando-s on the Mando, US fans can already get speculating about season 2, with a release window set and even our first casting rumour - a WWE veteran.

It's worth remembering that this isn't the only live action Star Wars series on the way either. Disney is also working on a Rogue One spin-off series starring Diego Luna and Alan Tudyk, due later this year, and Ewan McGregor will reprise his role as Obi-Wan Kenobi in yet another spin-off series after that - though that one will arrive a little later.

When does it come to the UK?

The show is exclusive to streaming service Disney+, but since the Disney streaming service won't launch in the UK until 24 March 2020, there's a long wait for UK Star Wars fans to watch it - despite it launching in the US back in November 2019.

Infuriatingly, that's only when the first episode arrives. The Mandalorian rolled out episodes on a weekly basis when it launched in the US, but we all assumed the later UK release would just drop the full first season at once, ready to binge. Not so, according to the Disney+ UK Twitter, which said "episodes will start to roll out from March 24th." So we won't get to the season finale until the middle of May!

Luckily we've figured out how to access Disney Plus from the UK and have already started watching.

When is season two coming?

Before we get to that, it's worth mentioning that even though the UK doesn't have the first season yet, there's already a second season of the show confirmed.

Showrunner Jon Favreau tweeted the news shortly after the season one finale dropped, revealing that season two will arrive sometime in Fall 2020, with an image that may well tease a return of the Gamorrean pig aliens best known as Jabba the Hutt's guards. Does that mean there's a Hutt on the way too?

Since then Disney CEO Bob Iger confirmed a slightly more specific release date, revealing in an earnings call that season two is set to drop in October 2020.

How to watch The Mandalorian in the UK

Since The Mandalorian won't have an official UK launch for a while, it'll take a VPN and either a foreign bank card or a little bit of effort in order to legally watch the show from the UK, or any of the other countries that won't have Disney+ available at launch - but we have made it work.

VPNs allow you to browse the internet anonymously, blocking your IP address. This means that you can appear as if you're browsing from another country, allowing you to bypass any geo-blocking. We personally recommend trying out NordVPN, but check out the rest of our recommendations for VPNs for streaming if you want to see some other options.

You'll have to install your VPN of choice and set it to a country that has Disney+ - the US would be the obvious option. Once you've done that open the Disney+ sign up page, create an account, and you should be able to get watching straight away.

The challenge is that Disney still requires you to have payment methods for the country you're signing up from, which makes things trickier. If you have a friend from a Disney+ country then you should be able to borrow their card to create an account, and then swap it to your own payment details before the 7-day free trial ends.

We've also successfully signed up using a sneaky workaround involving setting up a new American Apple ID or Google account and loading it up with digital gift card credit - check out our full guide to watching The Mandalorian in the UK for all the details.

How many episodes are there?

There are eight episodes in the first season, so we'd expect the same again in season two.

Yes! It took a while, but at the D23 Expo in late August Disney finally unveiled a full public trailer for The Mandalorian and shared it online too. Watch it right here:

A couple weeks before the show's debut the company added a second trailer, and this time we finally hear the Mandalorian himself speak:

In addition to the trailer, D23 brought us a pretty sweet poster to check out:

We also got another set of posters just hours ahead of the second trailer, showing off the rest of the cast:

#TheMandalorian . Meet the fierce characters of the #DisneyPlus original series and stay tuned for an all-new trailer tonight! pic.twitter.com/eVNYrC0JvC

Check out the photos

We've also had a few official photos, with a good look at the title character, along with a couple of the other faces that will appear in the show: 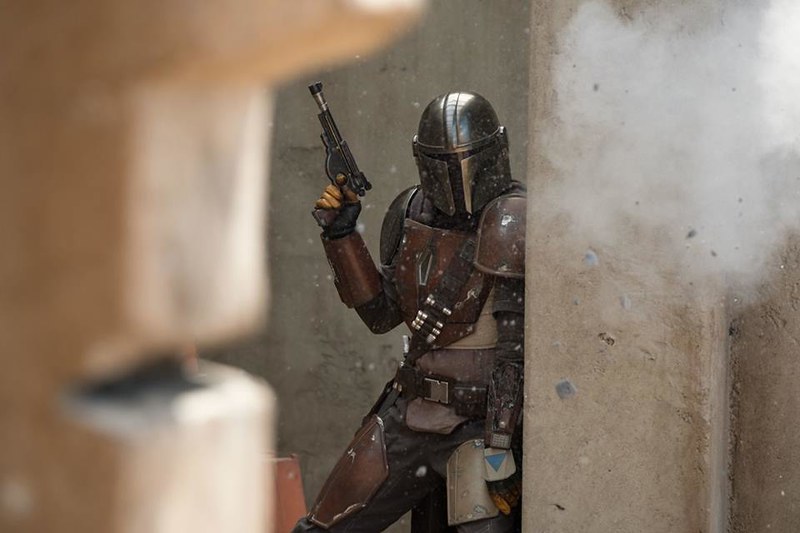 Playing the lead role is Pedro Pascal, best known as Prince Oberyn in Game of Thrones and Javier Pena in Narcos, and set to star in the upcoming Wonder Woman 1984.

We haven't heard much yet about season two's cast, but it's rumoured that WWE star Sasha Banks will be joining the show for its second season, and has already filmed scenes (which makes sense, given the timing). No word on how major her part is though, so this could be anything from a new co-lead down to a single-episode cameo.

Behind the cameras, Jon Favreau, who's a dab hand at both producing and directing and brought us Iron Man and The Jungle Book, is the showrunner and writer for the series.

He didn't direct every episode in season one though, as Lucasfilm recruited plenty of others. The premiere was directed by Dave Filoni, making his live action debut after years on the animated side of the Star Wars universe, in charge of series including Clone Wars, Rebels, and the newest animated series, Resistance.

He isn't alone though: other episode directors include TV veteran Deborah Chow (of multiple shows including Jessica Jones and Better Call Saul), Rick Famuyiwa (Dope), actor Bryce Dallas Howard (making her directorial debut, other than a few short films) and none other than Taika Waititi (who brought us the bonkers and brilliant Thor: Ragnarok).

What is The Mandalorian about?

After a lengthy period of radio silence and persistent rumours, Favreau announced the show's name and synopsis in October 2018:

The show takes place seven years after Return of the Jedi, so the characters from the original trilogy will be in their prime - though with the issues around casting we'd be surprised if any of them crop up in person, with the possible exception of the likes of the droids and Chewbacca.

In case you don't recognise the name, 'The Mandalorian' refers to the planet Mandalore. The Star Wars universe already has a couple of famous Mandalorians about too: the bounty hunter Jango Fett and his clone/son Boba Fett. In the Star Wars canon the Mandalorians are a pretty militaristic bunch whose soldiers wear the Fetts' iconic armour, so expect the show to be influenced by Boba's popularity.

Funnily enough, Favreau already has a connection to Mandalore: he voiced a Mandalorian called Pre Viszla in the cartoon The Clone Wars, a rebel who tried to overthrow the planet's government. That character died during the show though, so don't expect a return, though since a few Mandalorians have popped up between The Clone Wars and Rebels, we wouldn't be surprised to see some sort of cartoon cameo at least.

Will 5G kill you?

Becoming an In-House Illustrator: advice from those who've made it