During WW2 a black market thrived operated by “spivs” .

With idiots clearing shelves of toilet rolls etc and the possibility of rationing of food as a remote possibility, will a state of emergency be declared? If so spivs should be subject to heavy fines. The British stiff upper lip and stoic attitude seems to have all but disappeared

Maybe if supermarkets put up strategically placed notices, such as this, it might not get to that stage... 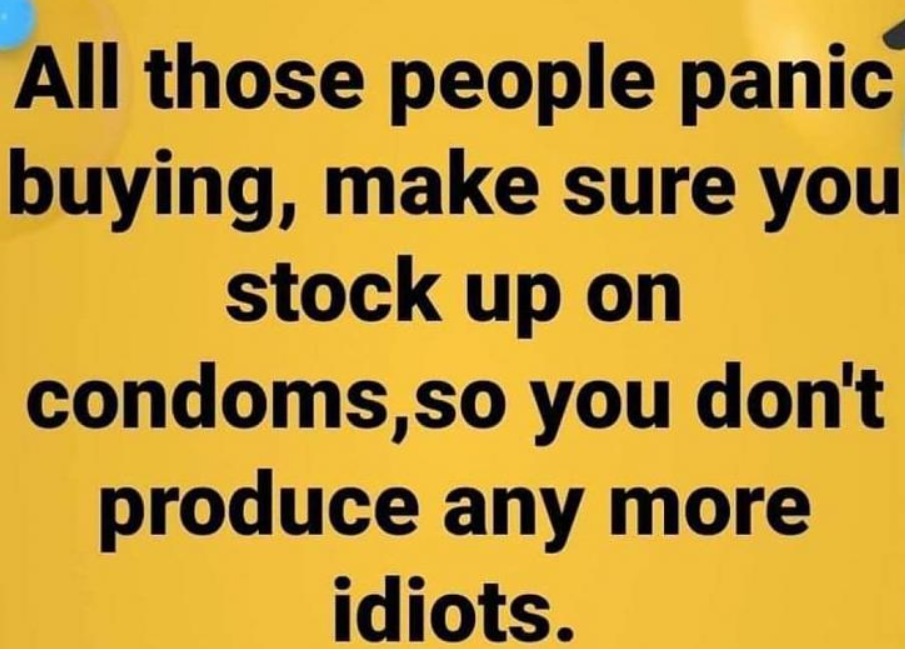 Also it is rumoured that police , if depleted by illness, may only investigate crimes involving loss of life, firearms etc. Will citizens , as they did very many years ago, form their own anti crime patrols? All this seems a bit far fetched at the moment but things are moving very rapidly

Also it is rumoured that police , if depleted by illness, may only investigate crimes involving loss of life, firearms etc.

Odious as he is, so far I had not heard that Cummings was selling toilet rolls out of a suitcase at £5 a roll!!

Give it a couple of weeks and it will settle down. People have only got a finite amount of space to store food and toilet rolls in so after that space is filled it will be back to just replacing what you have used.

Luckily the Supply Chain is fairly resilient. I was watching a guy min Morrisons this morning, as I bought my Oranges and Pears.

He was stacking his trolley with Vac Packs of ham, sausages, bacon and various other meats in quantities of 4 of each. Everyone to their own but, I'd put money on it that half of them get thrown out. Idiot

It seems Trump is trying to buy USA exclusive access to a vaccine- what a spiv!!

He was stacking his trolley with Vac Packs of ham, sausages, bacon and various other meats

These things do freeze quite well although I don't condone people being selfish so that other people can't get stuff.

Diversity Matters more than ever in illustration