take responsibility for our own health, so what are your plans to protect yourself from the Coronavirus?

Are you waiting for the government to provide guidance, or are you being proactive, and avoiding crowded places such as trains, buses and planes? If you are traveling by public transport, are you wearing a face mask? Are you washing your hands frequently, or do you think it's all a bit of a waste of time because if it's going to get you it will do so, whatever action you take?

I'm normally a bit of an optimist, but in this case I do think we are in for a very rough ride. This virus is going to infect huge numbers of people, and next year it may well come back in a mutated form and start all over again. In the 21st century we're going to be taught a very unpleasant lesson by something that is so small you need a very powerful microscope to see it, yet it's quite capable of killing a human host.

It seems to be the case that most of us will survive a coronavirus infection, but a lot of people will not. It's something to avoid if at all possible, that's for sure.

I don't think that there is realistically much that we can do, we will either get it or not, we will either recover from it or not, unless we all lock ourselves down for weeks on end. Of which the government is saying it may have to do.

In Morrison's yesterday, almost half of the shoppers seemed to have bought an inordinately excessive quantity of various cleaning products.

However it goes, I don't intend to get paranoid to that degree, I've already had 3 or 4 normal seasonal sniffles this year that go within a few days and by all account Corona isn't as obvious as that, so for all we know a good proportion of us may well have, or have had it already and not known it.

Normal cold and flu hygiene is the best that the best physicians can recommend and that doesn't stop us getting those.

The bare statistics say that it's no worse than any other flu that can be vaccinated against, so the problem seems to be that it's a potentially worse problem than it actually is.

My solution, make myself physically as resilient as I possibly can. I Walk, Swim, Yoga, Gym and Curl, as frequently as possible, and above all, eat healthily.

Also I have plenty of Whisky, Honey and Lemon, in the cupboard!

And that is it in a nutshell...Life will go on!

It didn't work before! plague kit

My main inconvenience is that England's Six Nations game is off!

I like your attitude Flak999 and of the same feeling. I'm an 'at risk' person and from next Wednesday will have to travel to Hospital every day for three weeks for the rest of my treatment. Being in the food production industry for over two decades i'm fastidious about washing my hands and that habit has carried over. One thing I'm trying to do is not to touch my face, as advised, but that seems a difficult habit to break.

This chap has it sorted. From the metro on line paper 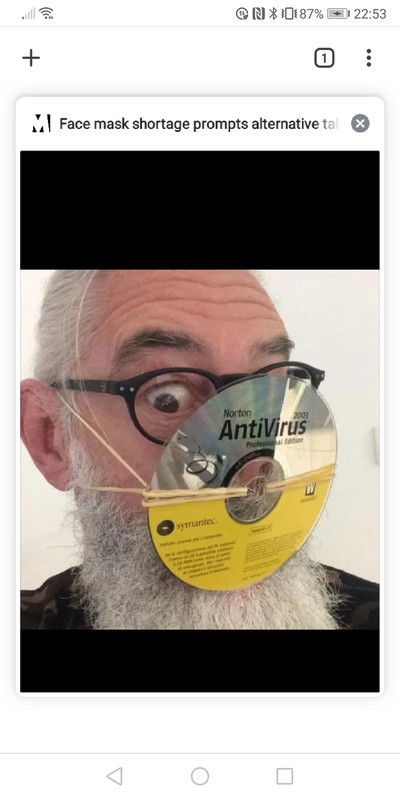 Like the other responders I shall keep calm and carry on. Being in the over 80 group I heard on the radio that I should avoid supermarkets, just on my return from Tescos. I survived the London Blitz, various military conflicts, , bird flu, swine flu, Asian flu etc. This is a slightly more serious influenza and 98% of us will survive .

I have several hospital appointments soon , which I suppose are the worst risk , but it seems to me that the British stiff upper lip is quivering, stirred up by huge press hype. This is a serious ‘flu epidemic , not the plague for goodness sake.

It is obvious that you should be sensible about hand washing etc but I hope that panic subsides sooner rather than later. Normal flu kills 10- 30,000 in U.K. - if it is double that I will be surprised

Keith Haring's only museum is now free and virtual to enjoy