My family is really struggling with our WiFi. It works perfectly sometimes, but then other times, it suddenly disconnects from all devices and we are unable to connect. This has been happening for about 3 years now.

I am an IT Consultant with 20 years of experience. I've tried 5 different routers of increasing number of antennas and price with no luck.

My house is a 3 bedroom terrace house and not that big. Even standing by the router doesn't help during a Wifi outage.

I've now signed up to BT's Complete Wifi solution which guarantees Wifi, but it hasn't helped. They say that they'll simply send another booster if there are problems, but during an outage, even the first booster goes offline. Even connecting to the router doesn't work.

Using a network cable works perfectly and speed tests are as fast as expected. So none of the ISPs I've been with will help.

I've tried changing channels and switching to 5GHz but nothing helps.

My neighbour just found out I was an IT Consultant, then told me he's also been having WiFi problems and asked me for help. The times when my WiFi dies matches up with the times he also has problems.

My current theory is now that there is some form of local interference. This is based on an issue a client had when they sent a cordless phone to America. After a few months, local authorities knocked on their door to inform them that they had traced a signal to their office which was interfering with local services. They performed a site survey and traced it to the cordless phone.

I currently believe someone in the area is using equipment that isn't certified for use in the UK.

I reported it to Ofcom (risking being charged £70+ per hour if the issue was with my own equipment). They called within 30 minutes, listened to the issue, but then said they didn't investigate home wifi issues.

So, I'm left with wondering, how do I scan for a device transmitting on the same frequencies as UK wifi channels? What equipment is needed for this type of thing?

Any help would be greatly appreciated. Three grumpy teenagers and a wife involved!

Many MANY thanks Dan

To find unknown signals which you think are interfering with your routers 2.4 GHz and 5 GHz bands. Your looking at some form spectrum analyzer, which are not cheap.

Or it could be your neighbour mucking around with a NodeMCU.

Electrical fault in the house somewhere maybe.Try plugging your router into a different socket see if that helps.

Have you tried turning the 5ghz of and just using the 2 ghz connection. I think most routers nowadays will work with both running at the same timework.

When I was with Virgin media I had to set my Wifi to 2 ghz as it would not connect using the 5 ghz.

It has been known for wireless phones to interfere with the signal or even old fridges.

I take it all wifi connections are plugged straight into a wall connection and not and extension cable.

It has been known for wireless phones to interfere with the signal.

Assume you ave used something like this wifi scanner to check what networks are in the local area.

Walk round the area and check houses for large radio antenna there may be a local Radio Ham living near by.

I've downloaded the free version of inSSIDer. The first thing it offers is an upgrade to the light version which I skipped. Interestingly ( on a 2.4 GHz only wlan laptop) it's suggesting I change channel for a better link score. Right click the image and select 'open image in a new tab' for a better view. 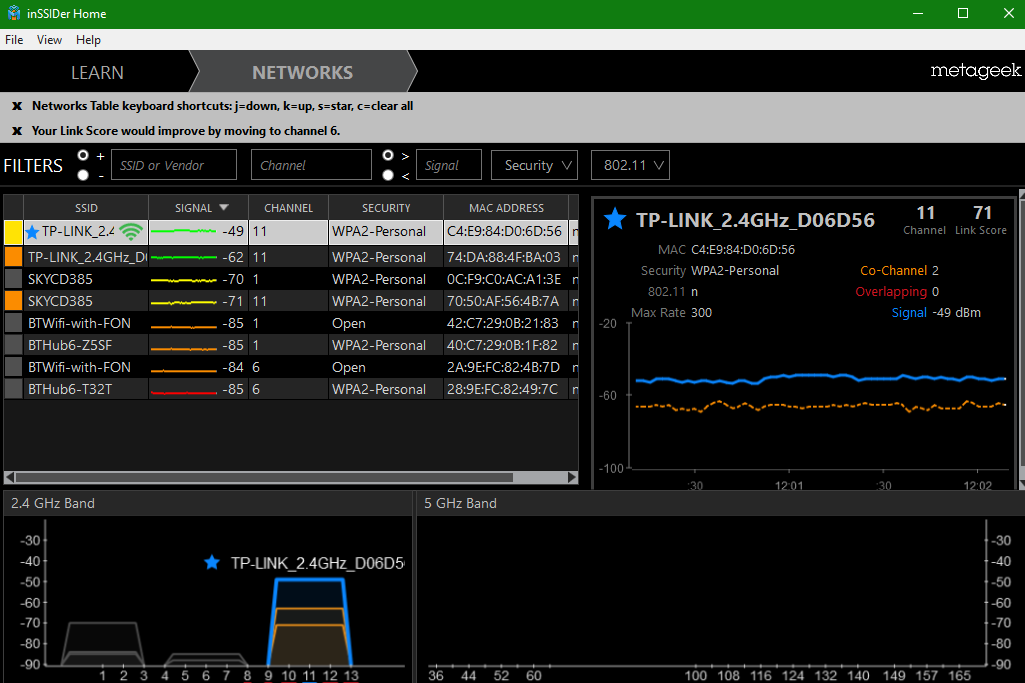 Have you tried turning the 5ghz of and just using the 2 ghz connection. I think most routers nowadays will work with both running at the same timework.

Currently, I've disabled 5ghz. The BT Complete Wifi requires that 2ghz and 5ghz have the same SSID, but that caused my wifi bulbs to say "5ghz network not supported. can only connect to a 2ghz network". So the only option was to disable the 5ghz band. It wasn't like the 5ghz was helping anyway.

Unless someone is using a non-UK cordless phone?

Assume you ave used something like this wifi scanner to check what networks are in the local area.

Yes. And the BT solution performs it's own scan to recommend a free channel. It works better than any other router I've used. Even the £200+ routers. But still totally dies off suddenly while all ethernet devices continue to function fine.

I recently changed from bt broadband copper to super fast fibre and my speeds were terrible , it turned out that the cabinet at the end of my street had too many wires too close to each other and they were shorting each other out. NOTE. if you ring bt they can do a line test and a cabinet test to check for faults that they may not be aware of.

It's not a line issue as the internet works perfectly via wired connections. During an event, ping rates to the router (192.168.1.1) from my laptop via wifi either timeout or around above 400ms at best. Connecting the same laptop via a network wire gets perfect 1ms pings or faster. At other times, (IE when there is no interference) it's between 1ms and 8ms via wifi.

As mentioned, you require a spectrum analyser. Its the only way to measure what if any erroneous signals are interfering with the 2.4GHz and 5GHz Wifi Bands. Using a Wifi Scanner such as insider is not going to tell you.

As an IT Consultant, I thought you would have know that.

I came across this post, and response, in respect of a similar situation - if you scroll down to Bob 1001 you will see it in full - an extract is....

BUT you have given some clues:- 1/ you are in a large detached house (I deduce your neighbour is similar) and needs better

My guess is that your neighbour has a Wi-Fi repeater, nothing wrong with that, BUT there are a number of illegal high power ones which have a range of several miles (If you google "High power Wi-Fi repeaters" you will find some), if he is using one of these it will certainly swamp your set up and give the symptom you have."

The Smartphone is Dead

Can you see the bottle in this Coke ad?